Barn Find...in my opinion, one of the most overused and maybe misused phrase in our old car hobby. It's certainly a popular one though!
Well, our '32 5 window Ford Coupe was definitely just that. It had remained stored in a barn for around 65 years before we pulled it out. The barn was even at a rather remote location with no easily accessible roads. There was a walk-in door, but we had to remove a few large metal panels in order to get the car out!
It was super interesting to see original inspection sticker from both Virginia and West Virginia dated 1954-55 and 1953.
The day that we pulled it out was an absolute blast! Due to its private location, just a handful of folks were invited to help. They included noted hot rod historian and automotive journalist, Ken Gross along with Tom Cotter of Hagerty's "Barn Find Hunter" video fame. In fact, we have some video that we plan putting together one day.
My son definitely missed school that day, and it's a memory that we will never forget.
Enjoy the pictures!

So, I love cars that tell a story...and this '32 5W tells a good one.
First though, I will just mention that as a young kid, my dad didn't own many cars earlier than those from the late fifties and definitely none form the 1930s. So, why the heck would I want a 1932 Ford?
For one thing, I think (and many others probably will agree) that the '32 Ford is just an iconic American car. I won't go into the reasons. If you are still reading, you probably already know.
If I already wasn't a big enough car geek, something cool happening when I was at the impressionable age of eleven. My dad took me to the movie theater, and we saw a movie named American Graffiti. Who didn't think that Milner's "piss yellow" 5 window just wasn't the coolest thing ever?
Somewhere around that time, my dad mentions that his old high school buddy had purchased a '32 coupe back in the early fifties, and it was till stored in a barn not too far from us. I cannot tell you how many times over the years I asked my dad to ask his buddy if he would sell that car! I never saw the car, but I never forgot it either.
Fast forward way ahead to just a few years ago. My dad passed away, and I talked to his buddy, the '32 owner, at the funeral. It's crazy, but I even remember asking about the car...he said that he still had it. A few short months later, he too passed away unexpectedly.
Over a year went by, and someone casually mentioned that the '32 had been sold. I was disappointed but moved on. A few months later, I see a Facebook Marketplace ad for a '32 Ford 5W Coupe...not something that I normally see of FB, especially close by.
It did not even ring a bell, until I was on the phone with the stepson of my dad's friend who was selling the car. We both connected the dots real quickly. It was the same car that I had been told about all of those years!
So...now the journey begins. Be sure to subscribe on the top right of this page, so you get the latest posts. I've got a bunch more to tell and an absolute ton of pictures to share. The engine is ready to go, and the "build" will start soon!
I'll also add that this Blog was originally created to document the Coupe. Well, I guess I got the Hot Rod Fever, because there is a '32 Roadster now, and I'll be sharing pictures and information about that one as well!!
at February 04, 2021 No comments: 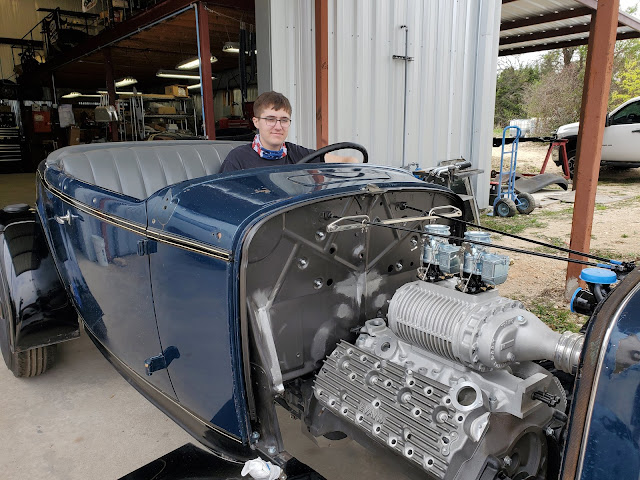